4 Ways to Protect Your Toddler in Summer

HOW TO PROTECT YOUR TODDLER FROM THE SUN & SAND THIS SUMMER

It might sound simple, but different hats offer different levels of protection from the sun. Select a wide brim hat to ensure your toddler has adequate coverage on their face, ears and back of neck. A hat with toggle will ensure your little one doesn't lose their hat while playing outdoors.

Apply SPF 50+ sunscreen regularly on your baby or toddler during the summer, even if it's overcast, as UV light can penetrate through clouds. Mineral-based sunscreens containing titanium dioxide or zinc oxide are considered to be the safest option for babies under six months, as they offer protection from UV light but very little is absorbed through the surface of the skin.

Select a swimming costume with long arms and legs for your baby and toddler to ensure their body is covered and adequately protected from the sun. Wetsuit style costumes also offer adequate protection from stingers including jelly fish and blue bottles that are prominent on beach during summer months.

Choose suitable toddler reef shoes such as our aqua shoes to protect little toes from rough sand, rocks, or shells at the beach or pool this summer. Opt for no shoes when sand is fine to build gross motor skills, and cover little feet while exploring rock pools, collecting shells or on hot concrete walking to or from the beach. 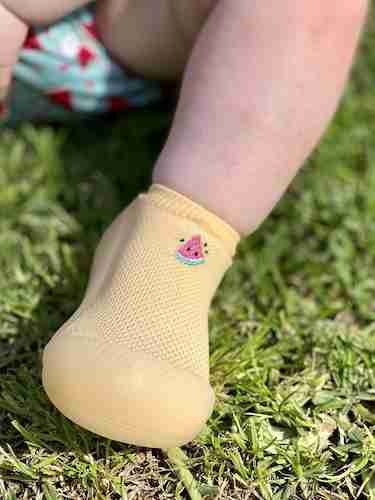 At Attipas, we say “less is more” when it comes to infant footwear. Our signature product is lightweight, flexible and mimics barefoot walking.

Attipas baby shoes come in over 50 colours in an identical design that slips on like a sock but supports like a shoe. Bestsellers include Sneaker: cute, sneaker-style shoes that look like traditional Converse; Rainbow: unisex, bright and bold stripes that match any outfit; Attibebe: soft pastel tones, a favourite for girls; and Marine: cute nautical themed pre-walkers, a favourite for boys. 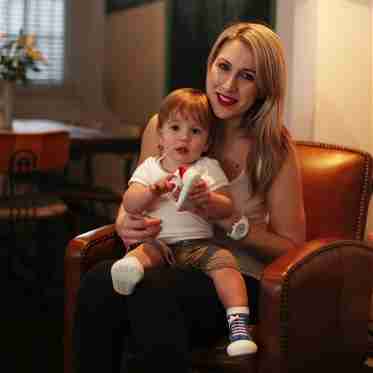 Caroline's 'less-is-more' approach to infant footwear has been adopted by hundreds of thousands of Australian parents, who use Attipas on their babies every single day.

“Caroline's 'less-is-more' approach to infant footwear has been adopted by hundreds of thousands of Australia parents, who use Attipas on their babies every single day.”

What customers are saying about us...

“Perfect fitting shoe-sock! I have bought countless pairs of shoes for my 1yo daughter who is still crawling/starting to walk but nothing would stay on - except these wonderful Attipas shoes!!! Very happy mumma" - Lian T.

"Easiest shoes to put on. Perfect shoes for my little boy. He loves walking in them" - Amanda P.

"Best investment for babies. I used a pair for my first born & she lived in hers. So when our little man started standing & pulling himself up, we knew we had to get a pair for him. I absolutely adore them" - Emily D.

"Recommend these shoes to everyone.  I now have 3 pairs of these shoes for my 17 month old. He loves them and has never tried to take them off. So easy to put on and so easy to clean. Love that he walks freely in them outside and inside. People always comment on how well he walks and how stable he is on his feet. I put that down to Attipas shoes. Recommend to everyone, you wont be disappointed!" - Louise C.

All Attipas products are tailor-made for environmentally conscious families.